Dive into the mysterious world of the Kingdom of Morocco, just a stone’s throw from the Spanish coast. Our day trip across the Gibraltar Strait will take you to the  bustling city of Tangier, one of the two most charming cities on the western Maghreb coast.

Our Tangier excursion will take you back to medieval times as you visit the renowned Kasbah that reveals the rich history of the city. Discover why so many celebrities have succumbed to the charms of this Moroccan destination.

SIGHTSEEING ALONG THE ATLANTIC COASTLINE OF MOROCCO

As we travel through the coastal city, we will make a stopover at Cape Spartel, where the Mediterranean Sea collides with the Atlantic Ocean, and the Caves of Hercules, where the Phoenicians created an opening towards the sea in the shape of Africa.

Once within the majestic medieval city walls, weave through the picturesque Medina of Tangier, an artisans’ hangout where craftsmen sell their traditional wares. This intriguin city features stunning beaches and Mediterranean-influenced architecture, Indulge in delicious authentic cuisine and immerse yourself in the vibrant atmosphere of this African country. 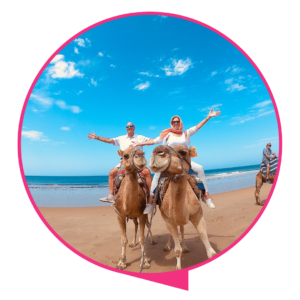 “When I planned our trip to Marbella, Spain, I read EVERYTHING I could find, and searched all over the internet for opinions and reviews on all the different tour operators, in order to ensure we would experience Marbella to the fullest. There is A LOT to do and SEE! I also wanted to make sure our group of four would be comfortable and safe. When I discovered Signature Tours Marbella, I hit a home run!!


Show More
Over weeks and months of preparation, I peppered Signature Tours Marbella with questions, which is how I came to know Montse. I inquired about everything from which tour? When? Why? Which combinations? How? Timing, weather, dress, cost, etc., etc., etc.. Montse responded to all of my questions in a timely fashion, always providing me with answers and her best recommendations. Even after booking with Signature Tours Marbella, I had to make a few changes and it was not a problem for Montse.

The final result: An exciting day trip to Morocco, a gorgeous sunset yacht charter on the Mediterranean, a unique road trip to Ronda, all with wonderful guides and authentic meals!! Our trip to Marbella was fantastic!!!

We booked it all through Signature Tours Marbella and we can’t wait to return and continue our Marbella adventures with Montse!”.